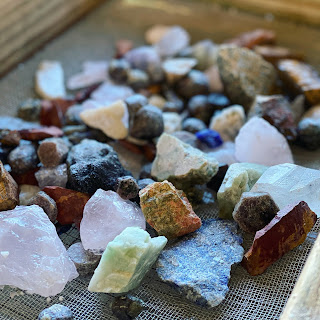 During a quick getaway to the mountains this past weekend, my girl and I went gem “mining.” Which is to say, we bought a huge bucket of rocks and sand, and then sifted it outside in the freezing cold air, in a trough filled with freezing cold water.

As we gathered hunks of lapis and emerald and sapphire and jasper (and nuggets of garnet and ruby and more that I can’t identify), I thought about the High Priest’s breastplate.

I wondered where in the world the Israelites found all those precious gemstones in the desert wilderness.

Then it occurred to me that these were treasures given to them by the Egyptians, as the terror of the final plague freed the Israelites from bondage.

And it made me wonder if - every time the High Priest ministered on behalf of the people - he remembered what it had cost to rescue them from Pharaoh.

Did he think about the last gasps of lambs and firstborns, and of horsemen overcome by unparting waters?

Did this make his prayers desperate and full of awe and thanksgiving?

Should it not do the same for me today, as I consider the cost of my rescue from the jaws of sin and death?

Because, like the High Priest, we are clothed with a treasure not our own, one we could not afford. Able to stand before the Lord only because of the blood of the Lamb, foreshadowed in that ancient exodus rescue.

Posted by Beginning With Moses at 10:03 PM