To say that this has been a hard couple of weeks would be the understatement of the year. Of course, we're less than three weeks into the new year, so I'm not sure what that says about the rest of 2021...

Helplessness and grief and anger seem to be all too familiar feelings for people over these last ten months, for all sorts of reasons and in varying proportions on various days. But God met me in my especially tender place on Saturday morning, January 9, with fresh perspective.

I sat there, curled up in my pjs with a cup of coffee, numb from two days of doom scrolling. I opened my one-year Bible, hoping to escape from it all to a better place. {Except that's really not the right reason for spending time in God's Word. Using the Bible to escape from the world is actually the opposite of its purpose! But I digress...}

Anyway, I picked up in the Genesis narrative right after Isaac's and Rebekah's short but sweet love-at-first-sight moment and marriage. Reading the next recorded moments of their history, gave me some perspective on this present one.

The passage started out with the account of barren Rebekah becoming pregnant with twins. Twins that seemed to be fighting inside her before they even saw the light of day. So what did troubled Rebekah do? The exact right thing: she asked God what in the world was going on inside her.

The LORD said to her, "Two nations are in your womb, and two peoples from within you will be separated; one people will be stronger than the other, and the older will serve the younger." When it came time for her to give birth, there were twin boys in her womb.  Genesis 25:22-23 NIV

God explained that these battling babies would one day grow from boys to men who would live at odds with one another. {A mother's sadness before they were even born...sigh.} God further revealed that the older son would serve the younger one, which was totally against the culture, even though their age difference would only be a matter of minutes.

Now, we don't have any window into what Esau's and Jacob's childhood looked like. Except that their father favored Esau (the older twin), because apparently Esau was a great hunter and Isaac had a thing for roasted mutton. Their mother, on the other hand, favored Jacob, the younger brother. Maybe because she knew God's special plans for him, or maybe because apparently he was a homebody who spent most of his time hanging out among the tents with his mom.

Whatever the reasons and whatever these relationships looked like, their dysfunctional family dynamic reached its boiling point when Isaac was 100 and his twin sons were 40. You probably know the story well. Isaac was now blind, and thought he was about to die. So he summoned Esau to pronounce his fatherly blessing on the firstborn (this was different from the birthright inheritance that Esau had already given away to Jacob over a bowl of stew).

On account of his taste for wild game, Isaac asked Esau to go hunting way out in the open country and then roast his kill. Isaac would then bestow his blessing on Esau while he enjoyed his meal. (What is it with these guys making blunders over food?)

So, at long last, I'm getting to my point.

Rebekah eavesdropped on this conversation. Now, this is purely conjecture, but I'm guessing that her internal narrative was something like, "Hey, God? You said that Esau was going to serve Jacob, not the other way around. But if that husband you gave me blesses Esau with the firstborn blessing, it will wreck Your plan."

Now here is where I wish she would have asked God to explain this unsettling situation, just like she'd done forty years earlier. But she didn't. Instead, her internal narrative probably continued on like this, based on what ended up happening:

"Okay, God. Since this isn't the way your plan is supposed to go, I'm going to honor You by helping You out. What's that? Ummm, sure, I'll be lying and stealing and teaching my younger son the art of deception, but it's all for the sake of upholding your plan, right?"

And so Rebekah concocted a plan that would force God's promise into fruition. One that would trample relationships left and right. 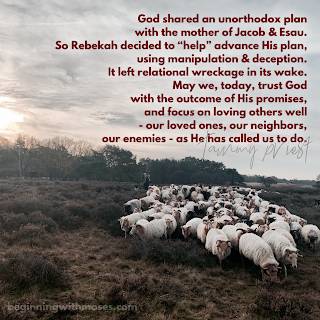 While Esau was out hunting dinner as his dad had instructed, Rebekah ordered Jacob to grab a couple goats from the flock outside the tent and bring them to her to cook. She then gave Esau's best clothes to Jacob and told him to disguise himself as Esau. To dress from head to toe like his hairy older brother, including wrapping his hands and neck with goat skin.  And then, pretending to be Esau, Jacob was to present his father with his mama's roasted meal. Just like she knew Daddy liked it.

By the time Esau arrived at Isaac's bedside, accompanied by the aroma of his freshly roasted game, his little brother was long gone. The firstborn blessings of wealth and power and family dominance had already been pronounced over Jacob, adding to Esau's double inheritance that was already secured in Jacob's pocket.

The relational wreckage that this deception caused cannot be ignored.

It must, of course, be said that God ultimately redeemed all this brokenness in different ways, over the generations, cultimating in the Exodus and ultimately the Cross.

But. All of this relational, generational wreckage could have been avoided if Rebekah had said, "Lord, I don't understand how your promises are going to happen, but I'll leave that to you, because it's way above my pay grade. In the meantime, I will focus my energy on loving well the ones you have placed before me: my husband, my children, my employees, the strangers I meet along the way."

It's when Rebecca decided to "help" God with His plan that things went awry.

And so, last Saturday morning, I thought about all the angst in our nation. And in the church.  All the relational wreckage between family and friends.

And I thought about Jesus' declaration that the greatest command was to love God with all our heart, mind, soul and strength. And that the second was as important as the first: to love our neighbor as ourselves. (see Mark 12 and Matthew 22)

And I thought about how lots of us claim to be "helping" God, while trampling other image bearers in the process. In both the physical and virtual public square. With both weapons and words. Words as weapons.

And it breaks my heart.

And so, I am asking God to help me not act like Rebekah. To not take matters - big or small - into my own hands. To put Him and other image bearers first. And put everything else a very distant second.

It isn't always easy. In fact, it usually isn't.

But if loving my neighbors - both inside and outside the body, friends and enemies alike - is what He's called us to do, I cannot turn away.

And so I will cling to God's Truth and His promises, trusting Him to bring them to fruition, while I do my best to love well the image bearers He places in my path.

Posted by Beginning With Moses at 1:21 PM