In the middle of a six-hour drive, my iPhone died.

I powered it off and on. I did a hard reset. Multiple times. Nothing. 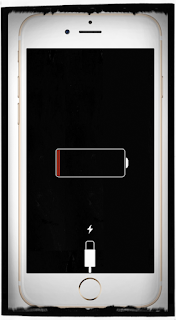 The whole family was in the car, so I had access to multiple chargers. Nothing. Dead as a door nail.

I started to stress.

What if there's a question about my ministry engagement scheduled for the next day? What if someone from my office was trying to reach me? I work in the pastor's office and it was the week before Easter, after all. Or, most importantly, what if the dog sitter has an emergency? I already missed those wrinkly faces terribly.

Unpacking at our destination, my husband offered me his charger. I scoffed. I'd already tried everything. A trip to the Verizon store was on my agenda for the next morning. I needed a new phone.

But my husband insisted. Fine. I felt a little like I imagine Peter might have felt when Jesus told him to drop the net on the other side if the boat. I've tried everything in the book and you think you have the secret trick. Fine. You'll see.

Yeah. Just like Peter, I was wrong. A little lightning bolt appeared. By morning, it was fully charged.

Here's what we discovered. My husband has an Apple charger. The rest of us have knockoffs. For some reason, my phone finally decided it was done with substitutes. It would only respond to the real thing.

As we head into Easter, the lesson was not lost on me.

Many of us spend our lives fueling up with substitutes. They look like they will satisfy. They seem to fill the void. They feel like they energize.

But, at the end of the day, they don't. They can't. They're counterfeits. Idols.

The cheaper, easier, more popular sources of happiness and satisfaction may seem to work for a time. For a lifetime, even.

But at the end of the day - at the end of our life - only the One who made us - made you - can give true life. Real, meaningful life in the midst of each day. And magnificent, joy-filled life for the rest of eternity.

So refuse to settle for counterfeits and grab hold of the One who made you, the One who can sustain you for always.
Posted by Beginning With Moses at 10:59 AM